About some months ago, New York City joined cities like Denver, San Francisco, Toronto, and Portland, Oregon, in making green roofs a requirement. This legislation is structured and targeted towards making roofs ‘more environmental friendly.’

This new sea of change is to affect mostly new buildings still under construction. The bill also extends to roofing where the building is to be expanded to accommodate more floors, or if there’s roof installation, roofing replacements, or renovation of the building. The sustainable roofs component of the legislation captured in Local Laws 92 and 94, took effect as of last month, November. Although the law is already taken effect, still most homeowners are yet to fully grasp what it entails, how it will benefit them, and above all, how to comply with the legislation fully. Here is all you need to know towards adapting to the already in place law.

The Objective Of The New Law

The new law was borne out of the necessity to tackle the burgeoning effect on climatic changes. With the new sustainable roof rules, the issues of rainwater runoff and the urban heat island effect, where urban areas have higher temperatures than neighboring rural areas will be effectively mitigated.

Also, an increase in green roofing, like solar panels, will increase NYC’s solar capacity and provide the city with cleaner air.

According to the New York City Councilman Rafael Espinal, co-sponsor of the bill, “the bill that won’t just make our skyline prettier—it will also improve the quality of life of New Yorkers for ages to come,” also, he stated that the new roofing system would cool down the city by mitigating the urban heat island effect. Moreover, it will cut energy costs, absorb air pollution, reduce stormwater runoff, promote biodiversity, provide soundproofing, and make our cities more livable for all.

Buildings Commissioner, Melanie E. La Rocca, opined that the city is not shirking from the challenge of climate change. If at all for anything, the law will help make NYC a national leader in reducing emissions.

Complying With The Law

Understanding of the fact that every building is unique is highlighted in Local Laws 92 and 94. It has, therefore, given flexibility to building owners to determine which of the sustainable roof systems complements their house best as well as their budget.

There also several factors that can influence the choice of sustainable roofing style, such as space constraints, zoning restrictions, and shades coming from adjacent buildings, green roof systems might be the best bargain for some buildings. In contrast, solar PV systems are ideal for others. Irrespective of the choice roofing system, many benefits are offered to building owners and tenants as well, by achieving compliance.

However, the exemptions to the law for green roofing systems are for areas that are covered with mechanical equipment or terraces. For solar roofing, the installations must generate not less than four kilowatts of electricity.

In order to ensure wholehearted compliance with the law, numerous financial assistance is offered to building owners via diverse forms of loans, tax abatements, and grants. Be it the solar way or the green roof you ought for; you are sure of cashing in on different tax breaks, grants, and loans available for each option. 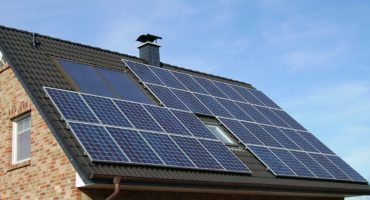